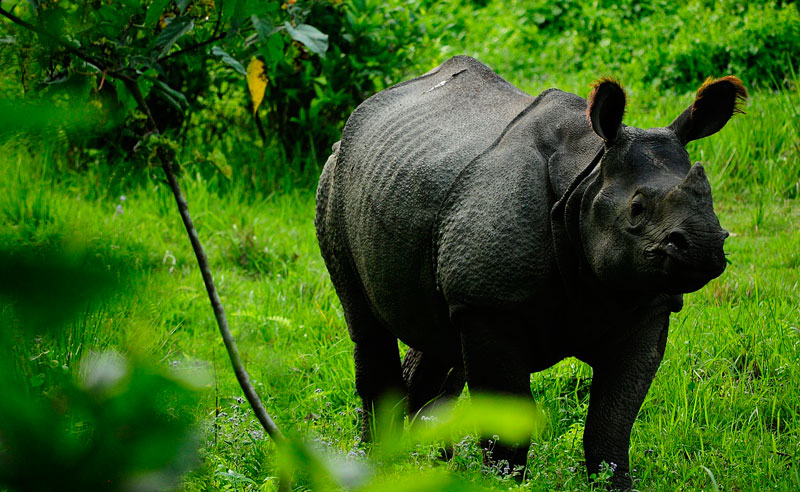 “When the alarm rang at 05:55 AM we thought that waking up so early was probably the hardest thing we’ll do today. But boy we were so wrong! We joked about having a “I shouldn’t be alive” adventure, but didn’t imagine we’ll actually be so close to such an experience.

After a picturesque 20 min ride in a horse cart, we arrived at the Chitwan National Park – Canoe Departure Point. The guards quickly checked our permits and then left us with our two guides.

Supposedly we had one certified guide and one apprentice. It didn’t take us long to realize they were both absolute noobs who couldn’t deliver on their promise: seeing wildlife.

If you’ve read at least one of Karl’s May novels, then you’re technically better prepared for stealth animal tracking. These two guys didn’t pay any attention to the path and constantly walked on fallen branches, making a lot more noise than us – the tourists.. No wonder we were only able to catch a glimpse of some deer buts busy running away from us. The whole jungle knew we were approaching, having an early warning system thanks to our incompetent guides.

They had one thing we needed though: knowledge about the jungle tracks and the way back to the village. Oh.. and they had bamboo sticks to protect us in case of a rhino or tiger attack I’m just glad the latter didn’t happen as I didn’t have too much faith in these people.

Anyway the story has a happy ending, so I’ll stop bickering and present the events as they unfolded.

The 45 min spent in the canoe were incredibly peaceful and pleasant. The sleep was still lingering on our eyelashes, so this gave us time to wake up properly.

The jungle walk was tiresome and disappointing. At some point it became obvious we weren’t advancing in the forest and just walked in circles for 2h near the river bank. The disappointment turned into a cocktail of feelings.. not all positive. So, we became sarcastic with the guides 🙂

We’re used to seeing the good side in anything and even taking problems as challenges. But there was nothing positive in being ripped off and lied to. They were not sticking to the path their boss outlined for us when we bought the trip. Also, every-time they saw rhino or elephant tracks, they changed direction saying “very dangerous!”. No kidding! We were in the god damn jungle for exactly that reason, wishing to see those wild animals in their natural habitat. Otherwise we would have gone to the animal prison (aka Zoo).

Anyway, the end of the trekking changed the situation for the better. Since we didn’t have a canoe anymore (as we left behind when the 2h walk started) we had to cross the river on foot. The water easily reached our waist and the current was quite strong. So, it was kind of fun and scary.. especially for me since I was carrying all my camera equipment. Long story short, we crossed safely on the other side. But, we can’t say the same for some local women carrying grass to their animals.

Two women lost their loads and only one could be recovered from downstream with the help of our guides. So, they proved useful after-all 🙂

On the other side of the river we saw lots of elephants coming for the daily bath, plus other people gathering grass. Good material for photos.

The real adventure however happened during the second part of the day, while taking the longer walk to the jungle observatory where we slept that night.

Because we complained to the hotel manager (who booked the morning tour for us) about the fact that the guides didn’t follow the right track, we got an extra trekking in the afternoon right before going to the watch tower.

With just one guide this time we were a lot more silent. We started shy with some bugs and wild chickens, but ended up staying within 50 m from a rhino!

The fun part started when the rhino prepared for a full charge in our direction. Since I was the only one actually enjoying this, it seems that “fun part” didn’t apply to everyone. I admit it was also scary as hell, but the thrill of it all was exhilarating.

Because the guide seemed somewhat overwhelmed by the situation, Andra assumed the pack’s protector position and started upgrading her sticks 🙂 After a couple of tactical advancements and retreats, we managed to go by the beast and get safely to the tower. Just so there’s no confusion here, when I say tactical retreats I mean it was more like this: we stood our ground to impress the rhino so that he wouldn’t attack. But, each time he moved a few steps in our direction we chickened out and run for cover.

So, we reached the last part of the story. I hope you were entertained so far, because this part is nowhere near as exciting as it was before. I’ll make it short though: jungle sounds, night sky, fireflies and distant lightnings made the evening magical! It was definitely worth it!

Tomorrow we’ll search for some new adventures to share with you guys. In the meantime, make sure to add Nepal to your list or at least search for similar locations nearby. Life is too short to be scared of rhinos 🙂 I hope you’ll get to experience similar adventures. I’ve learned it’s not hard, nor expensive to follow dreams. But.. we’ll cover this in another post.

Now, if you’ll excuse me, I’ll go outside to see if other animals came near the tower and then join Andra in dreaming about today’s adventures.”